Smart phones come loaded with great smart features but these smart phones consume battery to a great extent. Especially android smart phones have very poor battery life when compared to IOS, blackberry, and windows. This is due to its ability of multitasking on the go which is not efficient on other smart phones.

You may also like to read : Self care tips for android smart phones.

The features running in the background are one of the biggest reason of battery drain. Other reasons include improper upgrade as we see in Sony Xperia C and many other smart phones in which one faces quick battery from certain percentage within few minutes.

On the request of Sony Xperia C users we today present you with android battery tweaks that will surely increase battery life of Xperia C or any other smart phone.

Android Battery tweaks can be divided into various steps which include installation of apps or manually configuring your android phone.

We would request you to root your android phone in order to get good results.

Tweak I: Charge your android phone upto 100%. Now install Battery calibration app from playstore. Run the battery calibration app and click on calibrate battery. It requires root access. If you are asked for root permission then please grant root access. By doing this there will not be sharp fall in the battery usage like from 13% to 2% within seconds as this will show you accurate usage. 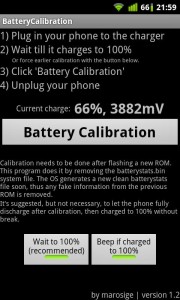 Tweak II: This tweak will aim at restricting background processes. We mean whenever you open any application and then directly press home button without closing the apps correctly and then you switch over other application. This leads to the consumption of more battery because, the app you directly switched over is still running in the background. To solve the same first of all Enable Developer Tools for your android smart phone. I you don’t see the option of developer tools then manually add it by going to settings and then going to about phone followed by Tapping 4-5 times on the build number, then automatically you will see the developer options in the settings menu. Just open Developer options and look for the the background apps settings which are generally found at the end. There you can set to No MultiTasking or don’t keep activities – which will kill all the background running apps to work simultaneously. If you do not want to do so, then you can also set the number of Maximum apps that could run in background while using them simultaneously. If you are opening more apps then the number you specified then the older apps get killed first.

Tweak III: It is not correct to say, using Internet on Android phone causes excessive data charges and also consume battery. It is not true until a newbie is using Android phone. This also leads to consumption of more battery when you Internet and many apps simultaneously consume your data 24 hours, a few are Play Store, Update Center and many more such apps. So we have the solution for the same. First of all go to settings, then go to Data Usage and now select the app you want to limit data usage off. Like we selected Facebook to give an example and then tap on Restrict Background Data. This will off your Facebook (here) to run in background and consume data and battery. 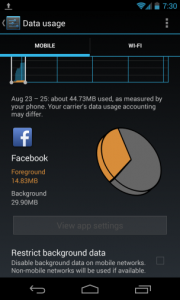 Now our further Android Battery Tweaks will be based on using Third Party Apps.

Tweak IV: Usage of Clean Master app can make your phone run smoothly and faster. As one can download Clean Master from the Play store for free, although it also has premium version too. One can just tap on brush which appears on your homescreen after installing it, by doing so all your background processes stops and you get more free RAM and hence less battery consumption.

Another thing which one can do to save battery life of android phone is just manage the start up apps. that s- whenever you start your Android smartphone, with it starts a lots of application which consume RAM of your phone and indirectly the battery of your smartphone. Using Clean Master one can disable the running of programs after Android phone starts; if you wish to run that program it will normally start without any problem. But do remember never stop Android Process; this will lead to crash of android system and you will need to restart. One can install Startup Manager to do the same.

Tweak V: Download and install NO Frills CPU control from Playstore, using this app just set up ypur maximum and minimum clock speed of CPU, but do remember do not put it to least as this would slow your phone and now just restart after applying the settings. If you want to revert back then again set default clockspeed of CPU, and then restart again. Full procedure is explained here: How to set CPU speed to save battery.

Tweak VI: Use this very interesting application CPU sleeper on your Android Phone. This application can save your battery a lot as it disables the phone when not in use and hence save much of your battery life. 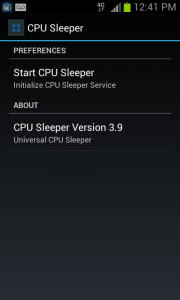 It makes your phone’s CPU to be in idle state when not in use, and only gives priority to important tasks like phone call and messaging.

Apart from the above tweaks to save Android phone battery. It also depends upon the manufacturer of your smartphone for example Sony Xperia C comes loaded with Stamina mode feature. One can enable it as per their need and save battery; whereas high end Samsung smart phones have the feature of setting display from coloured to black and white or grey to save battery. Others can also manually adjust the brightness of the screen in order to have better battery life.

Hoping that the article must have really helped you guys to increase the battery life, One may have other tricks to save android phone battery apart from the above or if you have struck anywhere then please drop a comment to share your views! We will surely be at your service. Don’t forget to subscribe to the site for more such important updates.